Megalodon Shark vs. The Great White Shark: Who Wins? 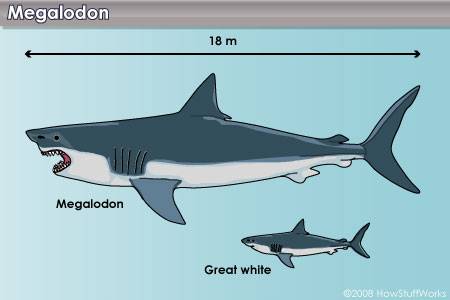 Paleontologists, scientists, and those enthusiastic about delving into the prehistoric age know that the great white shark of today is not the largest of the shark. Megalodon, a super-shark that ruled aquatic life in the prehistoric age, nearly 20 to 2.6 million years ago, was three times larger than the Great White shark, growing up to 16-18 meters (55-60 feet) in length. With a size so enormous, no doubt it is the largest of all sharks and was one of the most feared predators ever existed on Earth.

Most of the information about the gigantic Megalodon comes from the size of its tooth collected by researchers in different places all around the world. Judging by the tooth size, which may reach up to 18 cm (7 inches) long, researchers concluded that not only it was the largest and a fearsome creature of the prehistoric era, but also one of the most powerful predators with an estimated bite force of between 10.8 to 18.2 tones, which is quite impressive when compared with the bite force of 1.7 tones of the largest Great White shark ever recorded.

If you talk about the jaw size, Megalodon shark jaws were lined with 276 teeth and spanned roughly 2.7 to 3.4 meters (9-11 feet) wide, which is more than enough to swallow two adults side-by-side. On the other hand, the Great White shark jaws are recorded to a maximum width of 2 meters (6.5 feet).

The sharks swimming in the oceans today, in no way, would stand before the greatest and most feared of all — Megalodon — which is why fossil collectors prioritize its tooth before other sharks, including the Great White shark.

If you are looking for Megalodon shark jaw tooth for your fossil collection or any other purpose, we have the finest collection of shark teeth you should consider exploring.