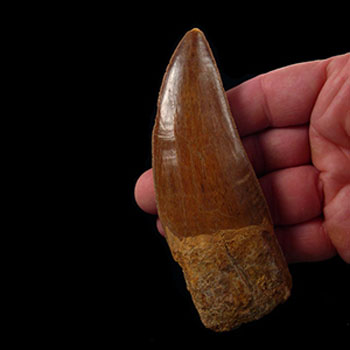 Buried Treasure Fossils offers a fantastic collection of Cretaceous and Jurassic dinosaur fossils for sale from the US and Morocco. Fossil remains include well preserved teeth, bones, and claws, and are highly valued by collectors. These top quality specimens were all legally collected from private lands in the northwestern US and Morocco. All are authentic dinosaur fossils and legally collected from private land!  US Dinosaurs - items are being added to the catalogs starting with Tyrannosaurus rex (T. rex) teeth, Nanotyrannus teeth, and many more species. All Moroccan dinosaur teeth catalogs are updated including Carcharodontosaurus (African T. rex) teeth, Spinosaurus teeth, Raptor teeth, and Pterosaur teeth. Authenticity guaranteed. Have a look.

If you're shopping around for dinosaur fossils for sale, you've come to the right place. Welcome to the online home of Buried Treasure Fossils. Here you can browse and buy an exceptional selection of bony antiquities.

What is a fossil?

It depends on who you ask. A collector may tell you that dinosaur fossils for sale are amazing artifacts from a prehistoric world. Paleontologists at Idaho State University explain more scientifically. There are two kinds of fossils as well as two ways that fossils are made. Body fossils are the mineralized remains of plants or animals that lived and died in the geologic past. Trace fossils such as dinosaur tracks are stony indicators that long-ago life was present at a particular place and time. Bodies and traces may be preserved with or without alteration. Non-alteration modes of preservation include mummification and freezing. Shells remains are also considered unaltered fossils. According to ISU, preservation modes that do alter remains include permineralization and carbonization. Fossils are clues that paleontologists use to learn about animals that have gone extinct. Fossil remains such as dinosaur bones, teeth, and tracks offer fantastic evidence of life on earth long before there were humans to write history. Everything that scientists know about dinosaurs comes from fossil records, explains the American Museum of Natural History.

Buried Treasure Fossils is pleased to present a marvelous collection of dinosaur fossils for sale from the Jurassic and Cretaceous periods. All our authentic dino fossils are legally obtained on private land in the United States and Morocco. High-quality specimens for sale include nicely preserved bones, teeth, and claws from ancient animals that roamed the earth for many millions of years.

Moroccan dinosaurs represented in our collection include:

We don't have dragon bones for sale today, but we know you'll want to see our super selection of dinosaur fossils for sale. We're always expanding our collection, so bookmark our page and be sure to check back often.