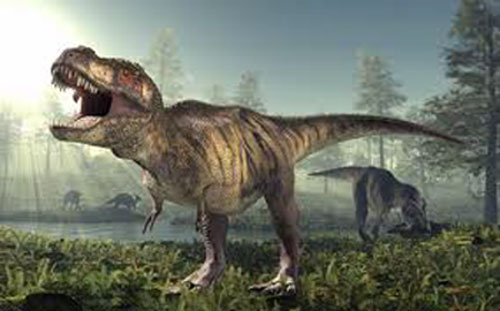 Buried Treasure Fossils offers Tyrannosaurus rex teeth for sale. Tyrannosaurus rex or "tyrant lizard" was the infamous apex predator of the late Cretaceous period. This monster reached lengths of more than 40', stood 13' tall at their hips, and reached weights approaching 7 tons. Their teeth reached lengths of 12" including the root. T. rex teeth have been referred as "banana teeth" by the renowned paleontologist Bob Bakker, curator of the HMNS. The T. rex teeth are round or or close to round to withstand the massive bone crushing bite force exerted (up to 10,000 lbs), the greatest bite force of any land animal. A must have item for dinosaur collectors. Fossil remains in teeth, bones, and claws. All of which are very rare and extremely difficult to locate. These top quality specimens were all legally collected from private lands in the northwestern US. Late Cretaceous, Hell Creek Fm. (or equivalent), 68-66 MYA. Authenticity guaranteed.

T. rex Teeth You Can Be Proud to Own

If you think that only paleontologists and museums can own T. rex teeth, do think again. If you have the interest and the wherewithal, you, too, can claim ownership of a fascinating and authentic dinosaur tooth.

Not only was Tyrannosaurus rex one of the most massive carnivorous dinosaurs ever discovered, but the massive beast has also received more media coverage than most other extinct giant reptiles. The star of “Jurassic Park” and other thrilling movies, the short-armed reptilian predator is believed to have been quite vicious. Alternately known as 'the king of the dinosaurs,' T. rex had teeth that could easily crush and mangle their prey, explains LiveScience magazine.

T. rex wasn't formally named until 1905 when paleontologist Henry F. Osborne had the honor of naming the legendary beast. The name Tyrannosaurus rex means something akin to tyrant lizard king. Stand next to a skeleton of a T. rex, and you'll know what it means to feel very, very small.

Customers who purchase T. rex teeth from Buried Treasure Fossils may be interested to know that the dental artifacts they will receive come from enormous animals that roamed North America for more than a million years. The long-ago reign of the lizard king extended from what we now know as Canada to Texas. Some scientists believe the species came from the Asiatic region even longer ago than that because a Tyrannosaur fossil was found in Mongolia, but most T. rex teeth and fossils have been unearthed in Wyoming, Montana, Utah, Texas, and Saskatchewan.

Of course, T. rex teeth are not the only amazing things we have for sale today. Buried Treasure Fossils offers an excellent selection of one-of-a-kind relics, including bones and teeth from:

If mammal fossils interest you, be sure to bookmark our catalog of ancient dolphin and whale teeth. Budding paleontologists will want to know more about our affordable collection of trilobites and smaller fossils. Over time, a love of fossils may well lead to an eventual purchase of authentic T. rex teeth, too.

Want to see a T. rex up close and personal?

You will get your chance to view the Wankel T. rex skeleton when the Smithsonian Dinosaur Hall reopens in 2019. At nearly 85 percent complete, the 65-million-year-old skeleton weighs in at a whopping seven tons and spans almost 40 feet from nose to tail. On loan from the Museum of the Rockies in Bozeman, Montana, the national museum will display the massive fossil for the next fifty years, according to Smithsonian magazine.

Fossil collection is a worthwhile hobby that never gets tiresome. In the world of fossils, there are new discoveries every week. In fact, we're now living in the golden age of dinosaur discovery, so watch our page for newly obtained T. rex teeth and other amazing artifacts.