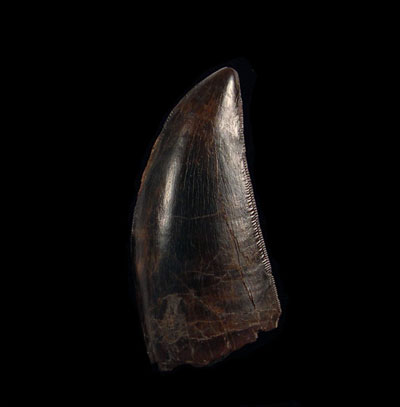 Name one of the most fearsome and largest carnivores that lived millions of years ago and continue to boggle our minds. It is Tyrannosaurus rex. The legendary fossil hunter Barnum Brown of the American Museum of Natural History discovered the first Tyrannosaurus rex (T. rex) specimen in Hell Creek Formation, Montana, and the rest is history.

We have movies, cartoons, comic books featuring the mighty T. rex. Remember how fascinated the world was to see the dinosaur life-size on the big screen in the Jurassic Park film series? We are still not over that.

For collectors, T. rex fossils are undoubtedly one of the most prized possessions. When genuine Tyrannosaur teeth are for sale, it is an opportunity to add to their collection.

How much do you know about the deadly creature? Let’s test your T. rex general knowledge.

Question 1: When was the Dinosaur Discovered?

It was the year 1902 when the first T. rex fossil was discovered. We already mentioned the man behind the discovery, Barnum Brown.

Barnum was an assistant curator at the American Museum of Natural History, and the T. Rex’s partial skeleton recovered by him became the holotype specimen for the species.

Barnum and the team found several other specimens of the dinosaur on their West expeditions.

The dinosaur was named in 1905 by Henry F. Osborn, who was the Museum’s President at the time.

Question 2: When Did the Dinosaur Live?

T. rex roamed the land about 68 to 66 million years before us. If we talk about geological time periods, it was the end of the Late Cretaceous Period.

Digging the deeper layers of sedimentary rocks is like looking back in time. The older layers get buried deeper due to sediment accumulation by water and wind over time. Paleontologists date rocks and fossils precisely by measuring radioactive elements, like radiocarbon, in them.

So, the Tyrannosaur teeth for sale you have been browsing were once part of the flesh and blood of living, breathing creatures millions of years before you were born.

Question 3: Where Did the Dinosaur Live?

Most Tyrannosaurus rex fossils have been found by paleontologists in western North America, including states such as South Dakota, Montana, and Wyoming.

Question 4: How Big was the Dinosaur?

Scientists believe T. rex would have been up to 12 feet high and 40 feet lengthwise. They determined the length and height of the dinosaur drawing from the fossil specimens.

If we talk about weight, Tyrannosaurus rex is estimated to have been anywhere between 11,000 to 15,000 pounds.

You can imagine how humongous the creature was!

Question 5: What Did the Dinosaur Eat?

The dinosaur was an active predator. Tyrannosaurus teeth for sale you see online and fossilized stomach contents helped scientists determine the dinosaur’s diet.

Carnivorous animals have sharp teeth with serrated dagger-like blades. The teeth were not only the means of killing the prey, but they also aided the animal in slicing the meat. T. rex swallowed whole chunks of meat without grinding or chopping.

How many of these T. rex facts did you already know?