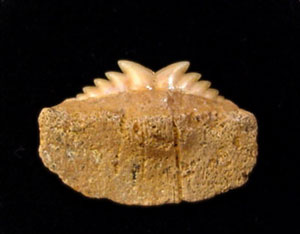 Ever wondered how the Cow sharks got their name? Or what makes them so special or different from other sharks that there are now Cow shark teeth for sale?

As insignificant as these questions may seem, the answers are sure to pique your curiosity and interest in Cow sharks. And who knows, you might get yourself a Cow shark tooth for sale after learning about them?

What are Cow Sharks?

The Cow sharks come from a shark family popularly known as Hexanchidae. The term “Hexanchidae” came from Greek, which means "six arches," referring to the fact that some Cow sharks have six-gill slits.

Of all the species, the Bluntnose Sixgill Shark (Hexanchus griseus) is the biggest, having six gills and a blunt nose, and Atlantic Sixgill is the most recently discovered Cow shark in the family.

Having six-gill slits alone is unique, considering the fact that almost every shark found today has only five-gill slits. And don’t be flabbergasted if we say that two of the cow sharks have seven gills.

The Sharpnose Sevengill and Broadnose Sevengill, as the names suggest, have seven gills, though they are a rare sight.

Another peculiar feature that makes them stand apart from the sharks of other species is their teeth. If you know how their teeth look like, you will have, in all likelihood, no trouble differentiating them from other sharks.

Cow sharks' teeth shape is one of the significant distinctions, with the lower lateral teeth resembling a unique rectangular shape. These lower lateral teeth are covered with a row of cusps that gets shorter as it moves towards the distal end. Due to the structure and appearance of their teeth, many experts compare their lower teeth with a saw blade.

If you are fascinated by how exactly the Cow sharks teeth look, you might consider buying Cow shark teeth for sale.

As per marine and shark biologists, cow sharks can grow to a length of 4.8 meters (15.5 feet); however, most cow sharks are somewhat smaller. The Broad Nose Sixgill is the biggest cow shark ever found, reaching up to 15 feet.

These sharks are most often found in deep, offshore waters, where they spend the day closer to the ocean floor at depths of nearly 2,000 meters (6,500 ft), and as the sun sets, they swim up toward the water surface to hunt.

Speaking of hunting, they are excellent predators, eating anything they find suitable and sufficient for their big appetite, from all sorts of bony fish to crustaceans and even other sharks.

Fascinated by the interesting facts we mentioned about Cow sharks? Don’t stop just there. Get yourself authentic Cow shark teeth for sale and fuel your fascination.

For the best fossils at affordable prices, explore our wide collection of authentic fossils today.