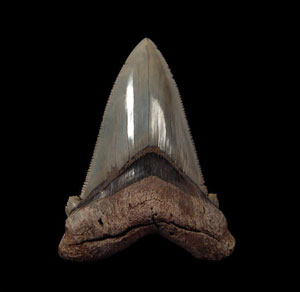 Carcharocles augustidens is a species from the Carcharoles (or Otodus) genus of the megatoothed sharks. Modern-day researchers believe that this species should not be placed with Great White shark genus. The specimen believed to belong to the extinct white shark is one of the most complete of its kind in the world. Compared to any living white shark, Carcharocles augustidens were much larger and heavier. The fossils that have been discovered included more than 150 teeth and multiple vertebrae. If you’re looking for Angustidens shark tooth for sale, here are four facts that you should know about the species before buying the shark tooth.

The large-sized Angustidens mean that the species must have been powerful predators that could only be rivaled by gigantic sharks and large raptorial sperm whales like the Brygmophyster. A wholly grown adult Augustiden probably fed on small to medium-sized cetaceans like small whales and dolphins. Juvenile Angustidens may have hunted fish and smaller marine animals since it may have been easier for them.

Finding a cluster of fossil teeth from any shark is a rare instant. You can purchase Angustidens shark tooth for sale from Buried Treasure Fossils obtained from Chandler Bridge Formation land site near Summerville, South Carolina, or other coastal locations. These fossils are from the Oligocene (28 million years ago). Carcharocles augustidens like all sharks have a tooth growing factory so that they could replace tooth loss during feeding. This tooth loss helps explain why shark teeth can be found in relative abundance in certain locations.

The vertebrae and teeth dimensions from one Angustidens were found to suggest that the animal was perhaps 8 tonnes in mass and 9m in length. On the other hand, Great White sharks are were about 1.2 tonnes and 6m in height. The animals they hunted, such as dolphins, fish, penguins, and small whales, fossils have occurred in the same rock as the shark.

Carcharocles augustidens teeth are distinctive from megalodon in terms of their additional side cusps that are sawtoothed like a steak knife. The megalodon and angustidens are an example of why bigger is not always better as they preyed on larger animals so much so that there was no prey left in the times ahead, ultimately leading to their extinction.

Every shark, its fossils, and other aspects have a different history. If you’re looking for Angustidens shark tooth for sale, look no further than Buried Treasure Fossils. The gorgeous Angustidens teeth have full roots, cusps, tips, well-defined serrations, and almost no damage of any sort. The serrations are razor sharp and well-defined. You can go through the top-quality Angustidens teeth collection from our website-authenticity guaranteed.