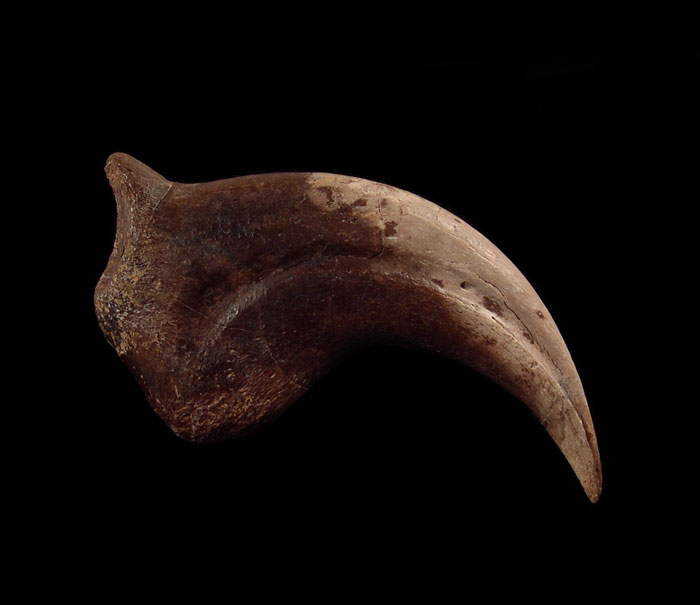 Deinonychus, a 7-foot-long dinosaur belonging to a genus of dinosaurs known as maniraptors, or "hand-robbers." It has sharp claws on its hands and feet for capturing and holding prey and was known as the red terrible claw dinosaur. The hollow bones and long legs of the dinosaur indicate quick and agile mobility.

The Deinonychus exhibit is the world's sole genuine fossil example of its kind on display. The skeletons of Deinonychus and early birds are comparable, indicating that current birds are descended from small dinosaurs. Deinonychus could cling to its prey with its lethal front claws. Each foot swiveled one huge claw, ready to rip prey apart with a kick. When not in use, the claw was kept sharp by being stored out of the way. Deinonychus might have pursued Tenontosaurus. It's been speculated that Deinonychus lived and hunted in packs, based on the discovery of several hundred Deinonychus bones in a single quarry by paleontologists John Ostrom and Grant E. Meyer in southern Montana in 1964. Deinonychus remains are frequently found with skeletons of the ornithopod dinosaur Tenontosaurus, implying that it ate and possibly hunted them. The discovery of Deinonychus, a visibly active, nimble predator identified and described by John Ostrom, changed the scientific (and public) understanding of dinosaurs and opened the door to the hypothesis that dinosaurs may have been warm-blooded.

After noticing parallels between Deinonychus' 'hand' and those of birds several years later, Ostrom resurrected the theory that birds are descended from dinosaurs. This concept is almost universally acknowledged thirty years later. In fact, Deinonychus and other dromaeosaurids seem so much like birds that it's been questioned if they're actual birds. This red terrible claw dinosaur may have carried feathers, as evidenced by the discovery of related dinosaurs such as Sinornithosaurus and Microraptor in China. Velociraptor, Utahraptor, and Dromaeosaurus are other relatives. The closest known relatives of Archaeopteryx and modern birds are dromaeosaurs and troodontids. These dinosaurs have a variety of characteristics with birds, including extraordinarily large arms and hands, as well as a sideways flexing wrist. Such adaptations are thought to have aided dinosaurs in catching prey and later enabled birds to create a powerful flying stroke.

While Deinonychus did not appear in any of the Jurassic Park books or films, the alleged Velociraptor in the movies is larger and more shaped like Deinonychus. This was because, in his book Predatory Dinosaurs of the World, Gregory S. Paul determined that Deinonychus was a Velociraptor species and renamed the species Velociraptor antirrhopus, a theory that has since been extensively debunked. In his writings, on which the first two films were based, Michael Crichton continued to use the terms interchangeably. Once upon a time, Deinonychus appeared in a Calvin and Hobbes comic strip. Calvin gives an overpopulation report in this strip, which includes a story about Susie Derkins being attacked and eaten by a pack of Deinonychus. One of the characters in the comic book series Runaways was given a Deinonychus, which she dubbed "Old Lace." Rachel and Tobias both morph red terrible claw dinosaur in the children's book series Animorphs in order to escape a herd of them. They succeed, but the morph is lost when they return to their own time in the present. The Dino-Riders toy line included action figures of Deinonychus; Talon is based on a Deinonychus in Primal Rage.