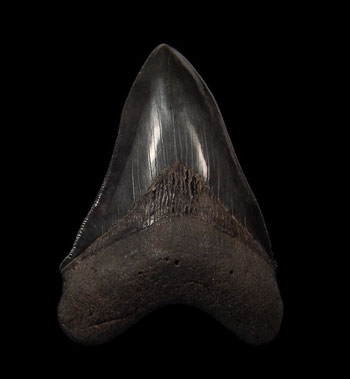 The Megalodon also called ‘Carcharocles Megalodon’ was the largest known shark to ever rule the ocean waters. The scientific name ‘Carcharocles Megalodon’ stands for ‘giant tooth’ and there is a good reason for that! Not only is the Megalodon the largest fish on record, but it is also popular for its massive teeth. The now extinct shark’s teeth were almost three times larger than that of a Great White shark. The fossilized teeth and bones of Megalodon have helped scientists figure out what the shark looked like and the reasons why it died off! Their black shark tooth is also a relic that collectors love to showcase in their homes.

Want to know some interesting tidbits about this huge shark specie? Here are a few:

1. Although shark skeletons are mostly made of cartilage, only teeth and occasional vertebrae of Megalodon, have been found in the fossil record. Examination of these fossils shows that they prowled the ocean approximately 2.6 million years ago. While there are rumors that claim they still live on, scientists are sure of their extinction.

2. Megalodons were huge! Experts don’t need a full fossil skeleton of the shark to figure out how long it was! An analysis of the tooth of the shark is enough to predict its length with fair accuracy! Studies were conducted with the Great White shark, and a similar approach can be used for the Megadolon as well. Studies of their large black shark tooth have confirmed that these sharks were capable of growing up to 60 feet long.

3. Given the speed and size of Megalodons, it is quite believable that the shark was an apex predator. The powerful bite this shark made it capable of devouring different kinds of animal species that lived in the ocean along with it. They probably preyed on whales along with other mammals, seals, and giant turtles. Ancient sperm and killer whales may have been tough competitors! As the population of Megalodons declined, their place was filled by other large predatory whales and the Great White shark.

Buried Treasure Fossil is the right place to purchase an authentic black shark tooth. Do check us out.