Velociraptors, In Reality, Didn’t Look As They Were Shown In The Jurassic Park Movie 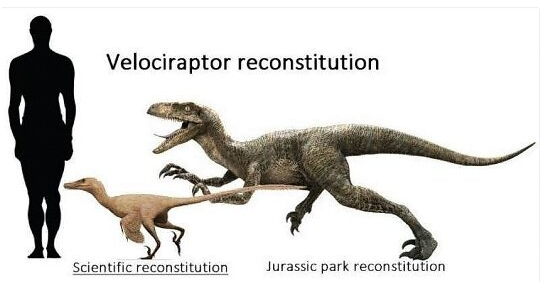 If you go by their name, you may think Velociraptor dinosaurs must have been quite fast in their time. This actually isn’t true as even a human child could have outrun most Velociraptors. Their name ‘Velociraptor’ means ‘swift robber’ and was given by American paleontologist Henry Osborn. He found their fossils in Mongolia. These dinosaurs belonged to the family of Dromaeosaurids, which consisted of feathered theropod dinosaurs. And they are related to Utahraptor and Deinonychus.

Scientists are of the view that these dinosaurs were not really fast but rather quick and stealthy in nature. This sneaky quality of theirs allowed them to feed off of other's nests and prey on animals of relatively smaller size. This somewhat justifies the ‘swift’ in Velocipraptor’s name. And the reason why they couldn’t have been fast is corroborated by their remains, which indicate that they had little, short legs similar to that of the turkeys.

Whatever information scientists have collected about these dinosaurs so far suggests that they didn’t hunt in packs. As a matter of fact, all the Velociraptors that scientists have found in Mongolia were alone. These dinosaurs likely survived by scavenging rather than hunting. This is proved to a great extent by a discovery in 2008 in which scientists found Velociraptor’s bite marks on a Protoceratop’s jaw.

But there’s a section of scientists that believe that Velociraptor instead hunted akin to present-day birds by swooping down on their prey and using their weight, they held the prey in place while eating them alive.

Although these dinosaurs were of about six feet long, they weighed considerably less for their height: only 30 pounds. If we were to compare Velociraptor with T-Rex, the former would be as long as the latter’s skull and neck. Although these dinosaurs hunted like the present-day birds, had feathers, and looked like many birds, they actually couldn’t fly, not even a few meters. How do we know that they had feathers? We know that through a fossilized velociraptor skeleton that still had quill knobs.

So those of you who thought Velociraptors raptor dinosaur were quite big and scaly-skinned after reading the novel and watching the movie Jurassic Park, the truth is they weren’t like that at all. In fact, they were portrayed seven times their actual size in the movie. They had scales in place of feathers in Jurassic Park. Well, now you know how these dinosaurs actually looked. If you want to purchase a real raptor teeth for fossil collection purposes, you can get them at Buried Treasure Fossils at great prices.