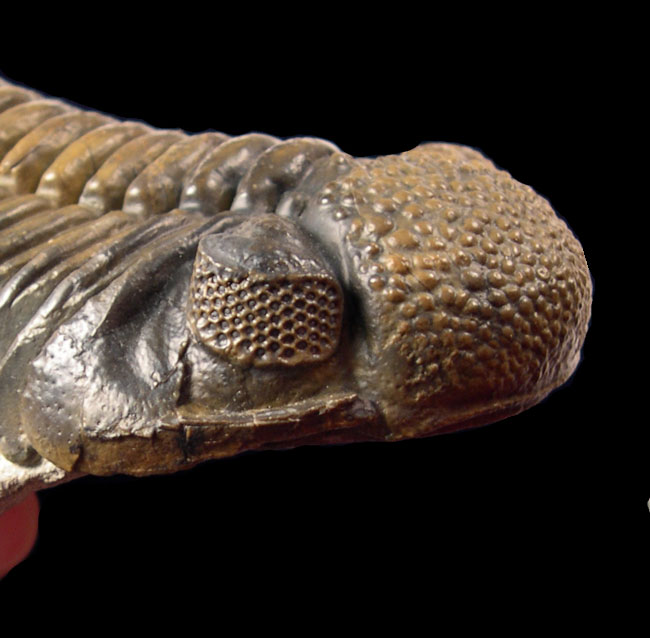 When trilobites emerged in the oceanic environment during the Cambrian period, they were already fully formed creatures. They had complex digestive systems, highly developed eyes, and functional calcite carapaces that were quite admirable. In other words, the most advanced life form at that moment on our planet were trilobites! While getting a well-preserved, authentic trilobite fossil is a daunting task, it is also among the most prized possession for a collector. So, we keep adding authentic trilobite fossils for sale to our selection.

Today, we will talk about trilobite eyes. It was fascinating that the creature developed a sophisticated visual system, although not the first one in the animal kingdom with eyes. But there were trilobite suborders, like Agnostina, who were primarily eyeless. The majority had compound pairs of eyes, typically placed on their fixigenas or the fixed cheek shell outer edges.

Trilobite had crystalline lenses that were rigid and could not change shape for focusing better on objects at different distances. But they had double lenses with different refractive indices, which corrected the problem. In fact, the rigid doublet lens allowed trilobites to have a remarkable field depth (they could focus on objects that were near and far with fairly good focus). The image distortion was also minimal.

Scientists recognize three kinds of eyes in trilobites, namely, abathochroal, holochroal, and schizochroal. The last two were the predominant types. Holochroal eyes had close packing biconvex lenses, with a single corneal layer covering the entire lens. The lens is typically hexagonal. Each eye could have up to 15,000 lenses! Schizochroal eyes had relatively thick, larger lenses, and the number per eye did not exceed a little more than 700. A separate cornea covered each lens. A few Cambrian trilobites were discovered with the abathochroal eye, which bore similarity to the schizochroal eye.

When you invest in trilobite fossils for sale, take notice of their exquisite eyes!

Variation In The Eyes Of Trilobites

The size and form of trilobite eyes showed huge variation. This was related to the ecological life of different species. In many early trilobites, such as the Corynexochida order, the eyes were more crescent like. Some trilobites, like the Opipeuter, had extremely large eyes that enabled them to have a 360-degree visual field. Then there were specialized forms, like Agnostus, that were probably entirely blind. Some species that moved through algal growth or loose debris benthic layer had eyes that were raised above their body that helped them look for danger, as the Russian Neoasaphus. Among bottom feeders, like the Cryptolithus, there was an evolutionary loss of eyes.

Those trilobites who were deep-water benthic habitats were used to the lack of light or dim light. They lost their eyes gradually, but they did not suffer from any adaptive disadvantage. These trilobites are referred to as atheloptic. Such evolutionary trends have been seen repeatedly in different trilobite orders, such as Devonian trilobites.

Trilobite fossils are highly collectible and exquisitely ornate. And you only want authentic pieces in your collection. Take a look at our selection of genuine, top-quality trilobite fossils for sale!