Evolution of Megalodon’s Teeth into the Ultimate Cutting Tools: Things You Should Know 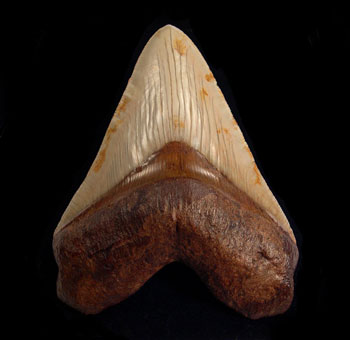 When it comes to knowing about an extinct species, what better way than to study the fossils of the creature that is long gone. Bones and teeth preserved for centuries and discovered, by chance or otherwise, enlighten us about the age of the extinct animal, the era in which it lived, the food it consumed, and so much more. Megalodon, the gigantic shark that once thrived in our ocean waters, is now extinct and Megalodon shark jaw has offered a wealth of information about the creature.

Megalodon means “big tooth” which makes it obvious that the now-extinct species was known for its teeth. The creature’s teeth hint that its hunting style consisted of a single-strike tactic. This allowed Megalodon to effectively immobilize its prey, letting it bleed out.

The gigantic bladelike teeth of the largest known shark to ever live were sometimes more than 7 inches long. In fact, Megalodon shark jaw has been described as “ultimate cutting tools” by paleontologists. Evolution is a wonderful phenomenon, and the iconic final form of Megadolon’s teeth is the result of evolution spanning over millions of years.

The earliest ancestors of the majestic shark, Otodus obliquus, had three-pronged teeth. Paleontologists believe that the creature’s teeth acted like a fork allowing it to grasp as well as tear even the fastest moving fishes. In later shark species with megatooth, it was noticed that teeth became flat and serrated edges were developed. This resulted in a transition to a knife akin shape enabling the creatures to prey on fleshier animals such as dolphins and whales.

It took almost 12 million years for the final evolution of tooth in these powerful and ferocious predators. Scientists, upon analyzing the teeth from both Megalodon and Carcharocles chubutensis, its immediate ancestor, discovered the gradual shift from a large tooth that was flanked by mini-teeth, referred to as lateral cusplets, to teeth where these structures were missing.

The transition to the final teeth structure was millions of years long and eventually bestowed the creature with a set of a flat and broad tooth along with uniform serrations- the perfect cutting tool.

If you are a shark tooth collector, always buy from trusted sources, like Buried Treasure Fossils, to ensure authenticity. Browse our collection of Megalodon shark jaw teeth and order one for yourself.