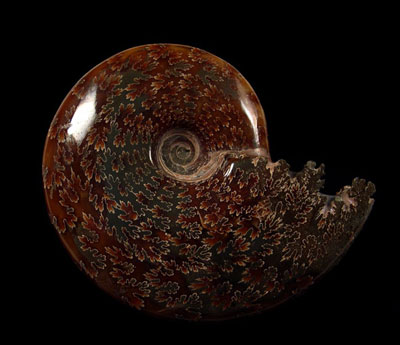 Fossils of marine animals have played an important role in furthering our understanding of the world that existed millions of years ago. Among the most important ones that continue to interest of paleontologists are perhaps the fossils of ammonites. After all, they serve as excellent index fossils when it comes to identifying and understanding the different geologic periods. Fossil collectors too, love to get their hands on ammonite fossils for sale because they essentially tell the history of life on earth!

But that’s not all. Ammonite fossils have amazed many with their unique qualities. In addition to being time markers for geologists and other experts, they also serve as great showpieces for homes, given their attractive shape and fascinating history.

Here are some really interesting facts about ammonite fossils:

1) Ammonites were marine creatures that can be considered as to be in the same family as that of octopuses and squids, the difference being that it had shells made from aragonite, a mineral that’s also found in pearls.

2) These invertebrate sea creatures first appeared around 240 million years ago, descending right from their ancestors, the straight-shelled cephalopods called ‘Bacrites’.

3) Ammonite shells are held in high regard in Chinese culture. Many still purchase ammonite fossils for sale to keep them in their homes, believing that it will ward off negative energies and bring them good luck.

4) Ammonites slowly disappeared around the time of the great dinosaur extinction at the end of the Cretaceous period, more popularly known as the K/T extinction event.

5) It was only recently discovered that female ammonites were larger in size than the male ones, given that they had to reproduce.

6) It was believed in Medieval Europe that ammonites were actually coiled serpents. Due to this, they were given the name “serpentstones.”

7) Ammonites were once called “ammonis cornua” by the great Roman scholar, Pliny the Elder as a sign of reverence for Ammon, an Egyptian god whose ram horn headgear drew comparisons with the fossil’s look.

8) Some fossils also show signs of horns and there are iridescent ones too that have also been recently discovered!

9) In Hindu religion, the fossilized remnants of ammonites are called ‘Shaligramas’. Respected and revered as a symbolic representation of the divine, these black colored fossils with discus marks are found in the South Asian region, mostly in the river beds of Gandaki, Nepal.

Looking for ammonites for sale? We have a wide range of fossils from different regions of the world that you will love! Original, authentic fossils that not only make for great gifts, but also just right for your prized fossil collection. Browse through our collection today.