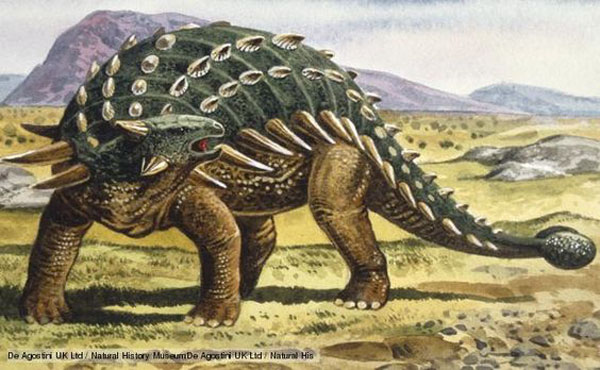 Ankylosaurs and the Nodosaurs, their cousins, are the familiar armored dinosaurs from the late Cretaceous period. They were covered with osteoderms or boney plates of protective armor, and the Ankylosaurs had a clubbed tail for added defense.  The Ankylosaurs and the Nodosaurs were large. Ankylosaurus, the largest Ankylosaur, reached lengths up to 30 feet and weight to 17000 lbs. Edmontonia, a Nodosaur, reached lengths of 22 feet and weighed up to 7000 lbs.  These dinosaurs were built close to the ground, wide barrel-chested, and quadrupedal. You can see them referred as the “tanks” of the dinosaur world, and would be quite challenging for a Tyrannosaur or raptor to attack; especially, the Ankylosaurs with their club tails. Many Tyrannosaurs including Tyrannosaurus rex have been found with broken and healed leg fractures. Those dinosaurs may have survived an encounter with an Ankylosaur.

Ankylosaurs and the Nodosaurs were herbivores. They had good sized teeth for cutting or nipping low lying vegetation. Today, we find their fossilized teeth, osteoderms (armor plates), and bones. We have a great assortment of Ankylosaurus fossils for sale. Note – Ankylosaurus was a rare species composing of only 1% of the dinosaurs species found in the Hell Creek Formation. Authenticity guaranteed.

Species include the following –