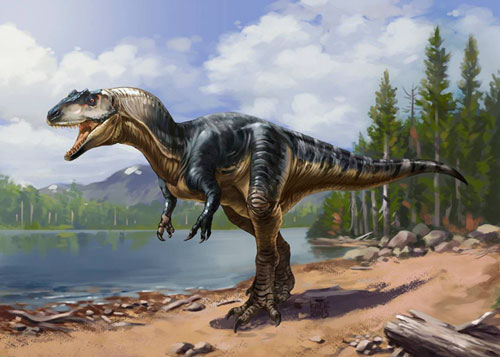 Tyrannosaurs from the late Cretaceous (Campanian) of northern North American include Albertosaurus, Daspletosaurus and Gorgosaurus. Fossils of these Campanian tyrannosaurs can found in the Judith River and Two Medicine Formations of northern Montana and the equivalent formations in Alberta.  All of these tyrannosaurs are related and are early relatives to the Tyrannosaurus rex which appears at end of the Cretaceous Period about 68 mya. All three of these tyrannosaurs are smaller than T. rex. The Daspletosaurus and Gorgosaurus were similarly sized and lived together during the same time period. They are approximately 30 foot long and weighed up to 5000 lbs. Albertosaurus had a similar length of up to 30 feet, but were lighter with a maximum weight of 4000 pounds. Albertosaurus  appears to evolved slightly later than the its two Judith River Formation tyrannosaur relatives. Albertosaurus was believed to be fast movers and there is trackway evidence that showed they hunted in packs. These tyrannosaurs would have feed on Hadrosaurs (Duck Bill dinosaurs) and ceratopsians (Horned dinosaurs).

Albertosaurus, Daspletosaurus and Gorgosaurus possessed teeth with similar size and design making identification of isolated teeth near impossible. Daspletosaurus would be slightly larger than other two Tyrannosaurs, and it was in the same sub-family as T. rex. So, Daspletosaurus is more closely related to T. rex and may have had tooth characteristics more similar to T. rex. An argument was made that 3-1/2”+ crowns that have an oval profile would be Daspletosaurus teeth. A tyrannosaur tooth found in the Two Medicine Formation of Montana may be restricted to Daspletosaurus or Gorgosaurus. So, identification with certainty of the Campanian tyrannosaur teeth is a challenge. Albertosaurus teeth are typically smaller and thinner since they would be used for slicing prey. I will make a case for specie likelihood based on size, robustness and location / formation found. The bottom line is these tyrannosaur teeth from the late Cretaceous (Campanian) of northern North American are high quality and exceptional teeth and are fantastic examples of an early relative of Tyrannosaurus rex.

Fact: Restoration and repair of dinosaur teeth is quite common. So, here is a helpful restoration / repair check –>  The tyrannosaur teeth of the late Cretaceous (Campanian) of northern North America all appear to be fluorescent. With a good black light, you can easily see cracks or areas of restoration which are not fluorescent. Have a look!