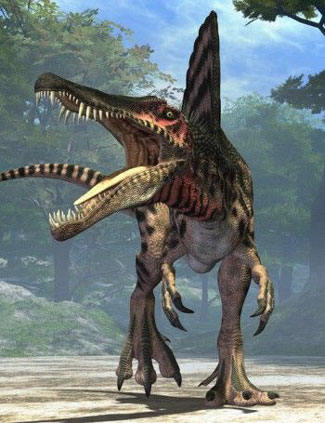 For a long time, paleontologists believed that dinosaurs were just land dwellers. They were of this view because they had not discovered fossil remains which would have made them think otherwise. But now, it is becoming sure that swimming dinosaurs possibly existed as well. Paleontologists have been trying to form a model of Spinosaurus for more than a decade. Most of them agreed that this dinosaur had different anatomy than land-dwelling dinosaurs, but they were not sure whether Spinosaurus was capable of swimming or not. But when fossil bones from Spinosaurus’ tail were discovered in south-east Morocco, paleontologists had to rethink about this massive meat-eater dinosaur’s capabilities.

Before we delve into the details of the fossil discovered, let’s first talk about Spinosaurus’description. The first fossil of this dinosaur was found in Egypt around 1910. We all hear so much about Tyrannosaurus Rex being the biggest dinosaur ever. This is not true as Spinosaurus was bigger and perhaps the largest meat-eating dinosaur ever on planet Earth. These dinosaurs lived around 100 years ago in the Cretaceous period in North Africa.

Spinosaurus has been a tricky dinosaur to understand. Its built was quite different from other dinosaurs, for example, its distinctive spines that grew to 5 feet long, its 49 feet length, and of course, its staggering weight of 7 to 20 tons. All these features and the destruction of crucial fossils during World War 2 made it difficult for paleontologists to reconstruct Spinosaurus confidently.

After discovering fossil bones from its tail, paleontologists have found that Spinosaurus’ tail was quite flexible and had a propulsive structure. The tail’s surface area was pretty large too due to a series of tall neural spines. These distinct features of Spinosaurus’ tail show that they engaged in tail-propelled locomotion, something that no other dinosaur was capable of doing.

Scientists became certain that Spinosaurus terrorized river and river banks when they joined a plastic model of the tail with a robotic swimming device in a lab and found that the tail could move sideways (laterally). A crocodile tail uses the same movement to develop thrust and power it through the water. Spinosaurus definitely pursued its prey in the water column in a similar fashion.

This discovery has forced paleontologists to come out of their old view that non-bird dinosaurs were totally land-dwellers. If not fully aquatic, Spinosaurus may have been as aquatic as Nile crocodiles. For example, its toe bones and claws were flat-bottomed; dense bone provided reasonable buoyancy control; nostrils were pretty high on the skull and far back from the tip; the newly-discovered tail was flexible and could move laterally. All these features are enough to call Spinosaurus a river monster.

If interested, you can buy Spinosaurus tooth for sale from Buried Treasure Fossils. You can also buy its bones and claws from us.

Mastodon Versus Mammoth: This Week’s Top Story In Mammoth Tooth For Sale

5 Prehistoric Whales That You Probably Don’t Know About

If Cave Bears Had Shorter Sinuses, Perhaps They Could Have Survived Too