4 Fascinating Facts about Tyrannosaur Rex You Aren’t Aware of 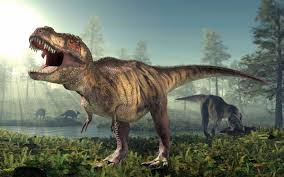 Tyrannosaurus rex, T-Rex for short, was a large bipedal predator with small arms and two-fingered claws that became extinct about 65 million years ago. Also known as the “King of the Dinosaurs”, T-Rex roamed on Earth only for two million years, a relatively short period of time considering dinosaurs ruled the land, water, and sky for about 165 million years.

The famous Cretaceous-Paleogene mass extinction event, when 15 km (9.3 miles) wide asteroid impact the Earth, caused the extinction of T-Rex dinosaur. But that’s not the surprising fact about this Tyrant Lizard King, below find more fascinating facts about this massive dinosaur.

Arms of T-Rex Weren’t As Tiny As Believed

Everyone likes to make fun of Tyrannosaurus rex's itzy bitzy arms. But in truth T-Rex arms were over three feet long. Though they seem small as compared to the rest of its giant body, their arms were surprisingly strong enough to lift 430 pounds of weight easily. However, paleontologists are still trying to figure out the possibilities of various functions of these strong arms.

T-Rex May or May Not Have Feathers

It’s hard to imagine this strong carnivore with feathers, but there are possibilities T-Rex infants may have been partially covered in feathers. Although no adult T-Rex has been found yet with signs of feathers, paleontologists believe hatchlings of T-Rex may have had their spine covered.

Female T-Rex Was Bigger Than the Male

The fact isn’t proven yet. But based on existing fossils’ sizes and shapes of the hips, it’s believed female Tyrannosaurs were bigger and heavier than their male counterparts. The most likely reason for their bigger hip size is that females had to lay multiple large sized eggs at the same time.

The Average Lifespan of T-Rex Was About 30 Years

It’s difficult to interpret the exact life span of Tyrannosaurus rex from fossil remains. But paleontologists believe T-Rex may have lived as an average age of 30 years. As this dinosaur belongs to the top of that-time food chain cycle, it would most likely to be downed by old age, hunger, disease, or attacks by another T-Rex.

If you’re fascinated about collecting fossils and teeth, you’re at the right place to buy Tyrannosaur teeth on sale.