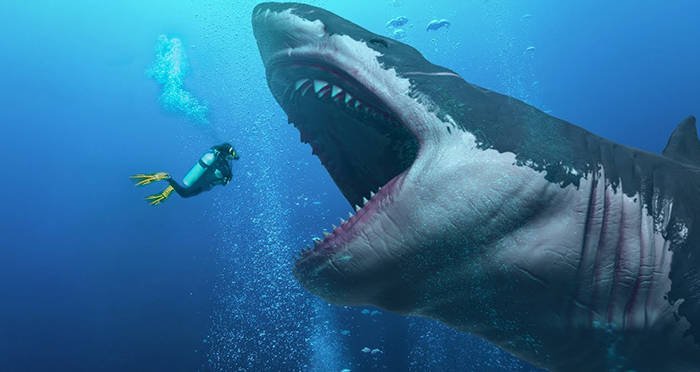 For more than 20 million years, there was one apex predator shark that lurked in the world’s oceans, and it’s name was Megalodon. It was the biggest prehistoric shark ever. This extraordinarily ginormous shark was also the largest marine predator in the history of Earth. It was much bigger than the modern Great White Shark as well as the mighty Kronosaurus, an extinct giant pliosaur. Here are a few more interesting facts about this extinct mackerel shark:

While it is the most common name used to refer to this shark (also often used as a moniker in pop culture), Megalodon is only half of its true scientific name. Paleontologists mostly classify this prehistoric predator under the extinct genus Carcharocles or Otodus. This makes its scientific name either Carcharocles megalodon or Otodus megalodon.

2. Megalodon was sometimes up to 60 feet long.

While the exact size of Megalodon is a debatable topic, mostly due to a lack of fossilized bones, scientists over the years have managed to come up with a few estimates. The estimates have been made mostly based on the size of their teeth (which sometimes grew as long as 7 inches!) and comparisons with the present-day Great White Shark. Most scientists agree that Megalodon was somewhere between 55 to 60 feet long on average and weighed a staggering 60 to 75 tons.

3. Megalodon had the most powerful bite of all creatures.

Did you know that Megalodon had a taste for giant whales? Do you know what that means? They had an incredibly powerful bite, enough to crush whale skulls with one attempt. Some 2008 research calculated Megalodon’s biting power using computer simulation and found that it clamped its jaws shut on its prey with around 11 to 18 tons of force per square inch! In comparison, a modern Great White Shark exhibits 1.8 tons of force.

Check out our blog posts to learn more about other prehistoric and extinct fauna of this planet.

Visit our online store to buy fossils of Megalodon, which is arguably the most famous extinct mackerel shark!